Paul had worked in the Steel Industry for years, from bridge building to working with oil and gas as a Plater. Unfortunately, after contracting for a number of years, Paul was made redundant in July as a result of the downturn in work due to the COVID-19 Pandemic. Paul struggled to secure alternative employment as the downturn in work was evident right throughout the already struggling industry. Although a little apprehensive about the prospect of retraining at his age, Paul noticed DTN Academy’s training course advertised and carried out some research into the industry to find that the Telecommunications Industry is booming and the prospect of securing employment was increasingly high. Paul registered his interest in joining the course at DTN Academy and was later offered a place on the next course.

Paul was excelling on the course and was achieving a wide range of accreditations to add to his C.V. Paul was starting to realise he had a specific interest in surveying due to his keen eye for detail and was hopeful that he could progress on to becoming a surveyor in the Telecommunications Industry. Paul was more than happy to support other learners in the group, and drew upon his Assessing Qualifications to mentor the young members within the group.

Paul commented on the fact that the whole group were working well together and this played a huge part in making the course as enjoyable as it was.

Upon Completion of our Course and Beyond:

Having achieved all the qualifications and accreditations that were on offer at DTN Academy, Paul attended an interview with one of the company directors at MAP Group UK, on the last day of the course. He referred to his particular interest in Surveying and that he would be interested in a surveying position if one was available.

Shortly after his interview, Paul received some really good news, not from MAP Group UK but from DTN Academy. Paul was offered a position as a Tutor at DTN Academy as a result of everybody being very impressed with his professionalism and dedication. Paul was ‘over the moon’ and accepted the offer of employment with no hesitation.

Paul now looks forward to developing and tailoring his teaching and assessing skills and becoming a part of the DTN Academy Team. 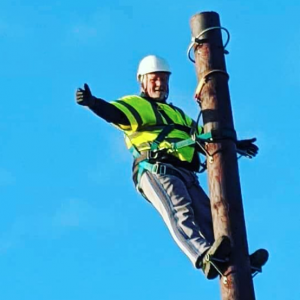 A message from Paul:

“A massive thanks to Mark Wilson, Mick Hare, Micky Lynch and Craig Ellis for all the help and guidance during my training at DTN Academy. There were a big factor in steering me in the right direction and now I’m glad to be part of the team and looking forward to working alongside Kev Wilson.

“Paul is the definition of a success story and everyone at DTN Academy is delighted to see him join our team. Paul’s work ethic, dedication and professionalism are the reason he has succeeded and we look forward to seeing him develop with us and inspire future learners to consider a career within the Telecommunications Industry. Well done Paul!”