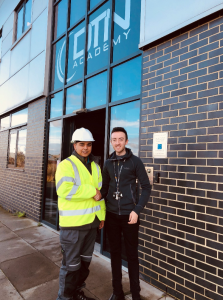 Naseem had been out of work for four months and arrived at DTN Academy with a background in the Utilities Industry. He went through school with some behavioural problems and even got permanently excluded from mainstream schools at the age of 13. Till the age of 18, Naseem attended alternative education which had much more of a practical based approach to learning which suited Naseem well.

From day one of our course, Naseem was excelling and he was already starting to make great strides towards passing our course with flying colours. You can see from his Mid Term Review below that he was outstanding in multiple areas, and from a lad that struggled in school, he was showing no signs of problems on our course. He did speak to us about the theory side of the course and explained that he gets distracted quite easily when he is writing, so we came to agreement to allow Naseem to listen to music whilst he was working on his theory work in hope that this would improve his concentration. Naseem had already shown he could develop excellent relationships with both members of staff and fellow learners and that he had a real gift when it came to customer service. 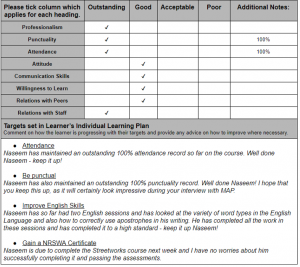 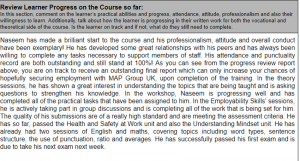 And… Naseem was enjoying our course too!

Upon Completion of our course: 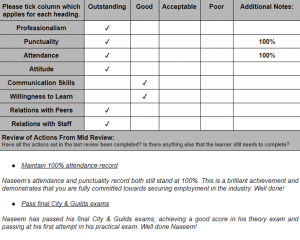 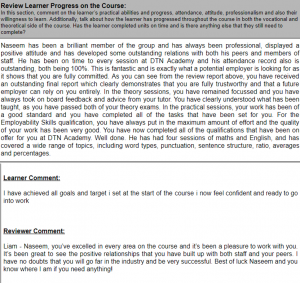 As you can see from Naseem’s Final Review, he was a perfect learner, achieving outstanding in numerous areas from relations with peers and staff to attendance and punctuality. He passed all of his exams, achieving good scores in both exams for his City & Guilds 3667 award and completing all of his coursework to a high standard for the other qualifications that were on offer. Naseem had an interview with MAP Group UK and they were really impressed with him. However, at that time, MAP Group UK were not recruiting, so it meant a waiting game for Naseem.

Six Months Down the Line…

After an agonisingly long six months of waiting, Naseem finally got a call from MAP Group UK and was invited to another interview, this time with one of the company’s directors. Following the interview, Naseem received the news he had been waiting for, MAP Group UK offered him the job as a Telecommunications Engineer, which he instantly accepted!

The following week, Naseem came back to DTN Academy to complete a week’s worth of training with MAP Group UK. This gave us some time to ask Naseem a couple of questions:

Why was DTN Academy different to school?

DTN Academy was much more hands on and allowed me to work in a less pressurised, more supportive and much more encouraging environment. I was much more interested in the subject that was being taught and the teachers considered my individual needs, letting me listen to music whilst I was working and encouraging me to learn in my own way.

What are your future plans?

After six months of waiting, I did start to think that it was never going to happen, but I am delighted that it has. I want to progress within MAP Group UK and hopefully in the future, move into a team leader position. I am going to push myself to my limits so I can be successful within MAP Group UK. I owe a lot to DTN Academy. 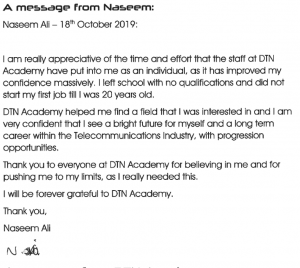 We would like to thank Naseem for his kind words and we wish him the best of luck for his new career within the Telecommunications Industry… we know he will be successful! We would like to remind Naseem that we are always here if he requires any more support in the future.