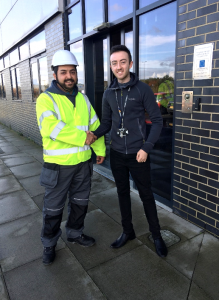 Ebrahim had been out of work for 3 months when he attended our Information session for our Structured Cabling Network Engineer Training Course in August 2019.

With a background in Engineering and a degree in Engineering in his home country of Iran, Ebrahim was interested with the hands-on work that was involved within the Telecommunications Industry. Having worked in the retail industry in the UK, Ebrahim was desperate to put his degree to use, as he was worrying that he would not be able to utilise the skills learnt in the UK. With the added bonus of an interview upon completion of the course at DTN Academy, Ebrahim knew that the course was the right one for him.

From day one of our course, Ebrahim demonstrated his excellent professionalism and pure dedication for learning as much as he possibly could from the course. Ebrahim was completing the work set for him by his tutor and the quality of his work was exceeding expectations set upon him. With 100% punctual attendance throughout the course, Ebrahim’s conduct was also being recognised by his peers, with many viewing him as a leader within the group. As you can see below, a comment on Ebrahim’s Mid Review from his tutor, shows just how well Ebrahim was progressing.

“Ebrahim, I am really happy with how you are progressing, and you are already showing your leadership abilities. Your work is of a really high standard and I hope you keep this up! Keep progressing the way you are, and you will have a great chance in the interview.”

Ebrahim was excelling in both theory and practical! 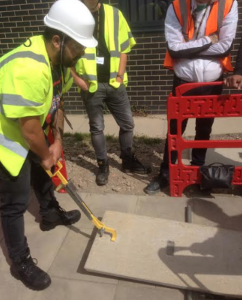 Upon Completion of our Course and Beyond:

Having achieved all the qualifications that were on offer at DTN Academy, Ebrahim completed the additional training, achieving the EUSR Card and NRSWA Unit 2 (Streetworks) and subsequently had his interview with MAP Group UK. Unfortunately, at the time, there weren’t any positions available at MAP Group UK, so Ebrahim had to wait a couple of months.

Two months later, Ebrahim was offered a follow up interview with one of the company directors at MAP Group UK, and following this, was offered a job with them.

A message from Ebrahim:

“I was attending a programme called, ‘Journey to Success’ through Thirteen Housing Group, who initially suggested that I do the course a few years ago. However, at the time, I was unable to do it due to my life situation at the time. This time, I applied to do the course, and I was successful in completing it, with the help of DTN Academy. I really appreciate the help and support from all of the staff at DTN Academy. I was invited for an interview with MAP Group UK and thankfully I was successful in the interview! I am now working with MAP Group UK and I am extremely happy with the decision I made to do the course, as it has provided me with an opportunity to start a new career, something I have been after for a long time. Thank you DTN Academy!”

Ebrahim was a pleasure to have on our course and we are delighted that he was offered employment upon completion of our course. Ebrahim has shown that with hard work, and the correct attitude, you can achieve what you set out to achieve!

We would like to wish Ebrahim the best of luck and for continued success in his new career!