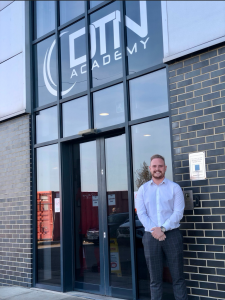 Callum left school with only one GCSE in Mathematics and went straight onto an apprenticeship programme. Unfortunately, towards the end of the programme, the company went into liquidation, meaning Callum could not complete his apprenticeship programme. Following on from the apprenticeship, Callum worked in a variety of call centres, but decided this wasn’t the career path for him. Later on, Callum did work for Amazon, however, was let go just before Christmas, leaving him to debate his future. Callum decided on a career within the digital sector, working on digital marketing and working with IT systems. Callum then noticed there was a vacancy at DTN Academy, funded through the Government’s Kickstart Scheme, and decided to apply.

During his time at DTN Academy:

Following a successful interview with the Directors at DTN Academy, Callum started working on social media marketing for DTN Academy programmes, using a variety of Microsoft Office software and using HDML code when updating DTN Academy’s website. Callum has received support during his placement to boost his employability skills, whilst also developing his existing skills in coding and web design.

Following completion of the kickstart scheme at DTN Academy, Callum was offered an interview a digital company based in the North East of England.  Shortly after his interview, Callum received an offer of employment and without hesitation, he accepted the offer. Starting on 1st December, Callum will be the Business Development Manager for Eden Digital Systems, with view to completing an advanced apprenticeship programme in the next two years.

A message from Callum:

“I would like to thank DTN for everything they have done for me, they have helped me so much and given me the relevant experience for what I want to do in life.”

Callum has been great during his time at DTN Academy, and we are really proud of the progress that has been made. He has worked really hard and has been innovative with his ideas on the design of marketing materials and our website. We would like to thank Callum for his hard work and wish him the best of luck in his new position!